Many people rose early and congregated on Queen’s Square at 6.00am to hear the bagpipes playing ‘Battles O’er’. Jamie Currie, dressed in full regalia played by the Poppy memorial and the short ceremony was attended by members of the Royal British Legion, Attleborough Town Council and many residents.  The Poppy memorial has been embellished with a new Plaque which lists the names of Attleborough residents who died in action engraved along the front edge and those enlisted from Attleborough engraved on both sides.

Many marched in the parade from Edenside to the ‘Act of Remembrance’ service at the War Memorial, marchers included members of the Royal British Legion, Attleborough Town Council, Attleborough Emergency Services and many community groups and school children. The ‘Last Post’ was played by bugler, Lizzie Abbot and the parade moved on to St Mary’s Church for a special Remembrance Service.

A congregation gathered for the ‘Armistice Vigil Service’ at 6pm at St Mary’s Church and the events continued later in Queens Square. A large gathering witnessed the reading by Cllr Sam Taylor of the Service mens’ names who served in WW1 from Attleborough; ‘The Tribute’ was read by Town Mayor, Vera Dale. The ‘Beacon of light’ was lit at 7pm and burnt whilst St Mary’s Church Bells were ‘Ringing out for Peace’.

This special day finally ended with A ‘Cry out for Peace around the World’,  by Alan Austin, Attleborough’s Town Crier. 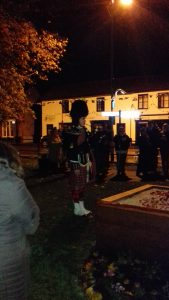 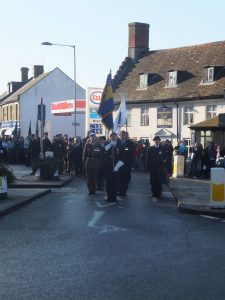 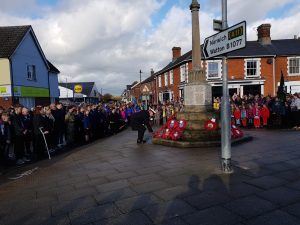 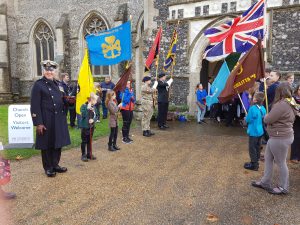 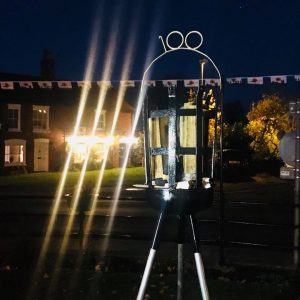